For the past couple of weeks, I’ve been winter caretaking out here at the Hobbit Hole.  The “inhobbitants,” Jane, Greg, and Fred, have migrated south, leaving me alone in the middle of the Wilderness, tasked with ensuring that this remote property keeps running the way it ought to.  And I exuberantly welcomed the chance to spend a month out here on my own — because for all the time I’ve spent thinking about this place, I’ve never spent more than a few days out here at a time.  I’ve never truly lived this life.  And if I’m going to lead the charge to turn this remote property into an institute for education and research, I’d better get to know the ins and outs of the place, its rhythms and cycles, as a sailor learns every inch of her boat before a long voyage.

So what is the rhythm out here?  What does a typical day look like out on the Inian Islands? 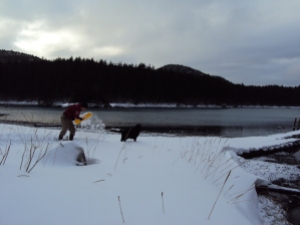 Shoveling snow with Lacy on the way out to the Hobbit Hole dock.

I tend to wake up around 8 or 8:30, prop my head up, and stare out at the cove for awhile.  Ahhh, this is the life!  Out here, there’s no alarm clock, no schedule, no rush. I take a look at the weather, watching for swaying treetops or ripples on the cove that forecast the fierce winds that are so typical out here in winter.  I notice Fred’s 38′ troller Apollo at the dock where it should be, and I spot a few juncos flitting between the spruce trees.  When Lacy the dog gets overcome with excitement and impatience, I climb out of bed, dress, and plug in the bright light that shines all day on the fast-growing herb starts: basil, cilantro, parsley and sage.  Coming downstairs, I let Lacy and myself out to pee in the cold air, then open up the duck coop to let out the 6 ducks, who noisily shuffle down the ramp toward their pool in the creek.  I look for eggs, noting that I should probably clean out all the duck sh** in the coop and put down fresh straw… but I probably won’t get to it today.  If there are eggs, it’s time to make myself an omelette, or if I fed the sourdough starter last night, it’s time for pancakes; otherwise, I scrounge for something less interesting.  Once I’m fed, I might sit down for a little work on the institute: there are always a hundred more emails to write, business plans to format, and summer courses to plan.  It’s pretty amazing to sit down at my computer with wireless satellite internet here in this vast Wilderness, and the isolation makes it a good place to work, the only interruption coming occasionally from the VHF radio standing by.  “This is US Coast Guard sector Juneau, This is US Coast Guard sector Juneau.  A storm warning has been issued for the following areas…”

The Hobbit Hole, buried in snow.

What happens next in my day really depends on the weather.  When I first arrived out here, we were in the middle of a deluge so heavy and prolonged, it got to feel almost biblical, with waterfalls running down the lawn and banks barely containing the creek.  But over the past week, things have turned cold — dropping almost to 0 degrees F, which is about as cold as it ever gets here in Southeast Alaska.  Such a drop in temperature changes life here at the Hobbit Hole in a few ways.  For one thing, it means that the moisture-laden air flowing off the Pacific Ocean dumps snow instead of rain, which in turn means that a good chunk of my morning is spent shoveling my way along the boardwalk and over the footbridge that connects all the buildings with the dock.  With a good 3 feet of powder snow stacked up, it also turns my morning “walks” with Lacy into wallows.  I usually make poor Lacy break trail, until she sinks in over her head and looks pitiably back at me for help.  All this cold weather also means that the house cools off a lot quicker, so after our wallow, I carry in a few loads of wood and get the fire started, placing the kettle on the woodstove for hot chocolate.

The biggest change brought about by all this cold weather is its effect on the power.  The Hobbit Hole is powered by a micro-hydroelectric system that taps the creek flowing down the mountain and through the heart of the property.  Back during the deluge, I was on what we call “Big Power”: with a full pipe of water running to the pelton wheel in the powerhouse, there was more power than I could use if I tried.  The hydroelectric system heats the place too, so I was luxuriating with ample hot water and so much baseboard heat that I sometimes had to open the windows to cool off.

The Alaska and Inian Islands Institute flags flying at the Hobbit Hole.

But as things turn cold, as the creek slows and freezes over, power becomes more limited.  Over a couple of days, I watched the %OUTPUT gauge drop from 95% to 40% — and now, I really have to watch what I turn on, or I risk a brownout.  Even for someone who spends a lot of his time thinking about natural resources, personally running up against the limits of a finite resource is a humbling lesson.  I’ll never forget when we brought our first group of Stanford students out here, and one evening Greg poked his head in the guest cabin door, saying, “We’re about to run the dishwasher, so I just wanted to make sure you don’t have any extra lights on or things plugged in you don’t need.”  To me, there’s as much educational value in that one statement as in an entire resource management course back at a conventional university setting like Stanford.  There, you learn about resource limits in class, then go back to your car and devices and spend the rest of your day pretending those limits don’t exist.  Here, you live within those limits, because there’s just no other way. 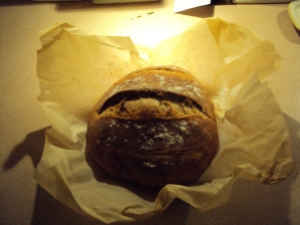 The low power during this cold snap has made for some interesting times, like making  dinner last night.  As evening fell, I was hungrily preparing orzo with a home-cooked-venison-burger-marinara-sauce and fresh baked bread.  But looking up at the struggling power gauge, and looking back at my 3-part meal, I realized I’d have to think ahead if I wanted my whole meal hot all at once.  As I’ve learned out here, anything with a heating element draws a LOT of power — a toaster might draw 30 times as much power as a laptop computer.  So I couldn’t have two such heating appliances on at once, or the power system would balk.  OK, I thought, here’s the plan.  First, heat up the marinara sauce on the electric hot plate, then cap it and move it to the top of the woodstove to keep warm while I deal with the rest of the meal.  Hot plate off — OK, now I can turn the microwave on to heat up the orzo.  Damn, the refrigerator cycle just came on!  Check the power gauge — we’re still OK, and the orzo is hot enough.  Cap the orzo, microwave off, and now I can put the bread in the toaster.  Add a little butter and grate some parmesan and voila!, a hot meal, one electrical device at a time.  The whole thing felt like a little dance to appease the god of power.

Of course, I could’ve used the gas-powered stove to make this meal a bit simpler, but out here, I enjoy the game of using as little fossil fuel as I can.  And it’s not only because I’m an unabashed greenie, and it’s not only because I just read Naomi Klein’s sobering new masterwork on climate change called This Changes Everything (which I can’t recommend highly enough).  It’s also because buying fossil fuels and transporting them out here gets damn expensive.  This hydroelectric power is not only clean and renewable, it’s also totally free.  Using these local resources provided freely by the land, like that venison burger, or the garden potatoes I roasted the night before, or all the pure fresh water you can drink — these bring the operating costs of Inian Islands Institute down, even as they help conserve finite resources.  So we’ll keep playing this game with students and visitors of all kinds, and see what creative ways we can come up with to keep reducing our dependence on the outside, and truly live local.  We’ll keep doing our dance to the gods of resources.

Well, it looks from the forecast like the rain is coming again, so I’ll probably be back on “Big Power” by the time I check in next.  It ain’t much for hiking, but at least the rain of Southeast Alaska does bring some benefits…

What kind of power are you on, out in the big world?