Last week I told about the day-to-day doings out at the Hobbit Hole, so now I thought I’d tell a bit more about the place itself.  There’s something about this homestead that seems to draw people here, body and spirit, through the years.  I doubt I have the wisdom to say exactly what that something might be – it probably verges on the ineffable.  But maybe writing this post will bring me closer to understanding the nature of the something.  In turn, maybe that will help me to understand myself, and why I’ve taken on the vast project of Inian Islands Institute with such abandon.  Thankfully, in seeking the nature of the something, there is no shortage of material to explore!  The Hobbit Hole is such a treasure-trove, I swear this post is going to write itself.

If you’ve followed along with the Inian Islands Institute dream, you probably know the 10,000 foot view of the place: 5 acres of private land ensconced in protected Wilderness, set on a natural harbor of the glacially-sculpted Inian Islands that floods and ebbs through the narrow entrance we call the gut.  Approaching, you tie your boat off to the dock, walk up the floats, traverse the footbridge over the creek, then continue up the boardwalk made slick in the rain, passing the garden and duck coop on your right and the buildings on your left: guest cabin, workshop, main house, and, winding the path up the bluff, Fred’s house.  And all around you, endless wildness most beautiful.

But to understand what the Hobbit Hole actually is, to draw nearer to the nature of the something, one has to look deeper than that surficial view.  As with all things, the closer you look, the more beautiful it becomes. It’s the details that make this place what it is.

The upstairs of the workshop, with pool table and other trinkets.

The first thing you notice when you start looking closer at the Hobbit Hole property is that there are things everywhere.  Trinkets abound, whether they’re dusty mementos, once-useful old tools, or decorative ornaments found on a nearby beach.  This is especially true in the warehouse: anyplace where an item can be put, placed, piled, set, hung, hooked, or otherwise stashed, you can bet an item will be there.  Lanterns, pots, boots, skulls, ropes, rifles, and tools serving every imaginable purpose under the cloudy sky, from wrenches to chainsaws to come-alongs and motors. It can begin to look like a confused jumble to the untrained eye – and perhaps to the trained eye as well – but there is some kind of order hidden in the chaos.  More than once this month I’ve called Greg or Jane in need of an odd or end, and they’ve unfailingly told me just exactly where to look.  As the decades passed, it seems every piece has come to live where it is most useful — a kind of auto-organization, like the creatures of an ecosystem partitioning themselves into their right niche.  Every piece bespeaks a deep history of making things work in a remote wilderness, where there’s no hardware store down the block, and no repairman to call.

History is one thing there’s no shortage of around here.  The Hobbit Hole has been a gathering place ever since there were people to gather.  The smells and sounds and shapes of this space are all redolent of a long human story.  The early chapters predate written language in this part of the world, with the testimony provided instead by the oral history of the Tlingit people, along with trade beads and other archaeological evidence from around the property.  But as I learned on this trip, the recent chapters have been written down, in a most colorful and creative way: the hand-drawn calendars.

One of hundreds of calendar pages, with drawings and scribbles of life in the wilderness.

When Jane handed me the calendars in a thick stack, I knew right away it was a gold mine.  They chronicle the property and its people all the way back to the 1970s – and this is no dry list of events, but a parade of art and humor and tribulation, each day another starburst of character.  The drawings are so filled with energy and life that they seem to dance on the page.  In the long evenings, with the sun going down so early these days, I started flipping through the months.  I felt as though I were hearing my own forgotten family history from a lost relative I never knew I had.  The calendars are a tradition we should definitely bring back at the institute, with a different student or visitor writing & drawing every day.

The calendars told me a lot about life out here in the old days.  For one thing, I got the sense that the weather hasn’t changed much: the rain was still pretty much incessant, and the sunny days were celebrated like the arrival of a benevolent god foretold for generations.  The entry for March 8th, 1986 is pretty typical: Taiga confirms that it was sorta sunny on this day… but coulda rained too, and probably did… And the next day, March 9th: I just bet it rained, and rained… accompanied by grey pencil drawings of clouds and droplets.  But on June 7th, SUNNY DAY!! is proclaimed in bold green, with a wonderful sketch of a fishing-boat-turned-pirate-ship under a steamy looking golden sun.  The entry continues: Everyone heads for the grounds. 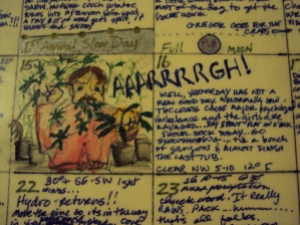 And then there were the days when the Hobbit Hole functioned more-or-less as a utopian hippie commune.  The 13th of an unknown month reads: Wake ‘em up! Wake ‘em up, you say! Sleepily, sleepily the pot plants wake up as slowly as we do from last nites crazy late music… Hawaii, mmm, Hawaii… The boys get out fishing after one wet boot in the ???, sourdough fallen in H2O. Enoch, 3 geese and I see the captain & partner of rum runner off.  And later that month: Well, yesterday was not a real good day. Abnormally low THC levels cause major psychological imbalance… Day spent flat on d’back. Shovel dock today… go snowshoeing… tie a bunch of gangions & almost finish the last tub. Clear NW 5-10, 12ºF.  In the “yesterday” slot referred to above, there are no written words, just a wild-eyed menace of a man who seems to be stuffing fistfuls of pot leaves into his mouth (see photo). Such entries may help explain why this place was known as the “Pot Hole” before my mom gave it the name that stuck.  I wonder if they could have imagined then that pot would become legal in Alaska in 2014?

A few entries were just odd.  On the 30th of January, 1980: Fourscore and seven years ago our forefathers brought forth on this continent a new nation conceived in liberty and dedicated to the proposition that… (continuing on the 31st of January): …plasmodic exhaust from Rygillian star cruiser causes inexplicable rift in space time continuum. Lose one turn.  Out here in the middle of the wilderness, I guess the mind can do strange things.  Good thing I’ll only be here for a month. 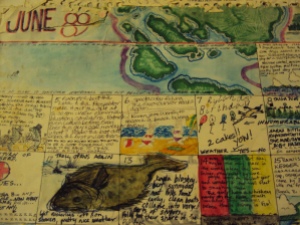 Another calendar page that made me smile, with the Inian Islands drawn at the top and a halibut towards the middle of the month.

I found a few red-letter days, like the day the micro-hydroelectric system was put in: THE BIG POUR!  THE DAM IS IN!  or is it?  We all huff & puff up the hilll… Kim’s a bit under the weather.  The last tomatoe.  And of course, I sought the day I was born, January 9, 1985. The entry is unremarkable, but good: To gillnet cove… right nice day… right nice day… me & ob to cove for mail & visits but no produce!!! maggie & david call with invite to s.c… ron calls… greg calls, won’t be back till 20th or so… boo hoo!! bright nite… Stars are drawn all over the page.

At the risk of over-romanticizing the lifestyle out here, it does seem to have had a kind of joyful simplicity. Take the entry from March 28, 1982: Visit from the Hoonah boys, good fish soup.  Or September 13: Sun & Wind… turns to evening clouds. dennis highlines… Ron to cove, Kim goes out with Snooze on the last drag of the summer, it’s over for the Snooze! Wood split…. Bob Gibson and Snoopy Steve come in for dinner.  I also enjoyed the entry of August 20, 1987: The house is quiet again.  Ma hobbit is picking currents, Kim is cleaning like a mad woman.  Bob-o is out on the dock w/the boat.  reeba, bob-o, debra, tim, steve all hit the emb, and greg — christopher took off for the grounds.  Linda and Peter left after a hobbit-holiday.  We’ve all feasted on blueberry & strawberry pie, and feasted on good conversation and companionship.  Over time, you get a sense of a group of people who love each other and the world around them.  When work needs to be done, they do it with their hands and do it together.  When work doesn’t need to be done, they enjoy the miracle, unalloyed by the angst that often describes our modern urban show.

After caretaking here, I do think I’m a bit closer to understanding the nature of the something that draws people like me to the Hobbit Hole.  It’s not just the spectacular Southeast Alaska beauty, although that is a part of it.  But it runs deeper.  I think we’re confronted by an awful lot of artificiality these days.  Our world seems built of plastic, made in China.  I think we find ourselves hungry for depth, history, and reality.  That’s what the Hobbit Hole provides for me: my feet are planted on solid ground, and I am becoming part of a long tradition that honors the abundance of the land and sea.  This place is endowed with what can only be described as a great immensity of character.

And so, after looking closely at the Hobbit Hole, it’s time to turn our gaze back outward.  I hike with Lacy up to the top of the island and watch the wonderful light change on the slopes of the Fairweather Mountains.  Turning, I see bursts of wind pushing the wild ocean out towards the Gulf of Alaska.  I could be the first person on earth, and the last!  I am John Muir’s nerve-shaken, over-civilized thousands, and I have come home.

The Fairweather Mountains, looking north from the Inian Islands.

From: Inian Online Journal
← Caretaking, Part I
A Different Kind of Wilderness →
No comments yet